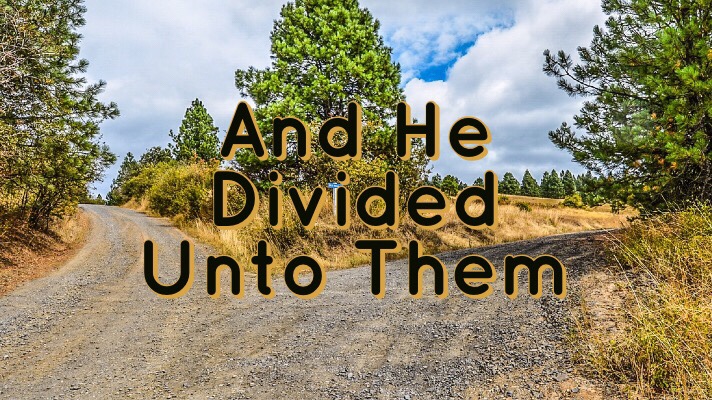 I have been thinking a lot about the story of the prodigal son the last few days. There is so many different truths wrapped up in that story. You can take the people involved and look at their lives through this time and learn great lessons from them. You can take the events and learn from them! You can even take the places that are defined in this story and get great truths and practical lessons from them. So because of that, I still have a few more truths that I noticed during the multiple times of reading this story the last few days, that I want to share with you!

“And he said, A certain man had two sons: And the younger of them said to his father, Father, give me the portion of goods that falleth to me. And he divided unto them his living.” Luke 15:11-12

I find the phrase, “And he divided unto them his living.” very intriguing. I have read this story many times and I guess I have never noticed that pronoun, ‘them.’ When I usually read this story, I am thinking to myself about the prodigal son and how he is about to take his inheritance and go waste it in a far land. That pronoun ‘them’ signifies that it is plural, meaning the father divided his inheritance to both his sons.

The younger son went to his father and demanded his portion of the inheritance. He wanted whatever was coming to him now. He was acting like a selfish, spoiled brat that we see so much in society today…kids demanding of their parents to give them whatever they want.

The father took his living, his wealth, his property, everything he had and he divided it out to (‘them’) his sons. I wonder how this father felt. Was he sad because his son was demanding his inheritance? Was he happy because he knew that what he was giving/leaving for his sons would set them up for life? Was his heart full of love as he decided who was going to get what? I am sure a little of each one of these emotions was running through him!

The oldest son was probably a little taken back when his father handed him his inheritance. He probably wondered what happened to make his father do that. Was his father sick? Did his father think that something was going to happen to him and he wanted to make sure he gave his sons their inheritance before he was gone? I am sure the oldest son had a lot of questions in his mind when this event happened!

Once the father handed his sons their inheritance, they both had a decision to make…

God has given us, His children, our inheritance in that we don’t have to go to Hell. We have Heaven as our future home. We have His Word and all the promises that are in it. We have everything that we need to be a successful servant of God.

We, as Christians, like those two sons, also have a decision to make…

The oldest son decided to stay home and serve for and with his father.

The youngest son decided to leave and do his own thing in a far country.

Each son had a CHANCE to do right. We live a life of 50-50 odds. We either choose right or we choose wrong. Everyday we are faced with a chance of succeeding or failing.

The youngest son wasn’t a prodigal son at the beginning of the story. It could have been the older son that ended up being the prodigal son. Both of them could have left and both of them could have stayed. But they each had a chance to affect the rest of their life when that inheritance was handed to him. The oldest took it and I believe he put it right back into his father’s business and made a wise investment with it. The youngest took it and left, and instead of investing it, he wasted it with a lifestyle full of pleasure and parties and lost everything. The consequences were that the oldest had a steady job in need of nothing and the youngest had nothing in need of everything.

God our Father has given us, as His children, everything we need….what are we going to do with it? 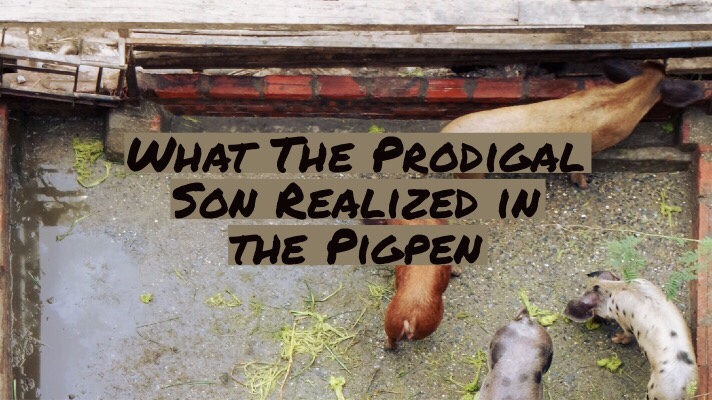 In the last post we talked about what the prodigal son left behind, what he left at home. He left the presence of a loving father, the provisions and livelihood of his father and also the protection that came from living with his father. When we as the children of God, decide to leave, we are also leaving these things behind.

“And not many days after the younger son gathered all together, and took his journey into a far country, and there wasted his substance with riotous living. And when he had spent all, there arose a mighty famine in that land; and he began to be in want. And he went and joined himself to a citizen of that country; and he sent him into his fields to feed swine. And he would fain have filled his belly with the husks that the swine did eat: and no man gave unto him. And when he came to himself, he said, How many hired servants of my father’s have bread enough and to spare, and I perish with hunger! I will arise and go to my father, and will say unto him, Father, I have sinned against heaven, and before thee, And am no more worthy to be called thy son: make me as one of thy hired servants.” ‭‭Luke‬ ‭15:13-19‬ ‭KJV

The prodigal son went from having the best to having nothing at all. He found out that life outside the walls, life away from home, wasn’t all it was cracked up to be!

3 Lessons from the Pigpen

To make it simple, stay home, stay in the will of God! The world has absolutely nothing to offer except emptiness!

Go get a t-shirt from our store!!

We went to a pumpkin patch today to pick pumpkins for our girls! We had a great time picking pumpkins, feeding the animals, riding a pony, going through the corn maze, and just playing! We had a great day!

I took my daughter through the corn maze and it made me think about life. In the corn maze, the goal is to make it out the end. As an adult, it took me a little bit to figure it out! My 2 year old, as big as she thinks she is would have never made it out! She needed a guide, someone to lead her through.

The best guide we can have is the Lord! He will lead us in the way we should go. He will direct us in the path we should take.

In this corn maze of life, with all its dead ends and the paths that go in circles, let’s ask for the Lord to lead us.

“Trust in the Lord with all thine heart; and lean not unto thine own understanding. In all thy ways acknowledge him, and he shall direct thy paths.”

“A man’s heart deviseth his way: but the Lord directeth his steps.”