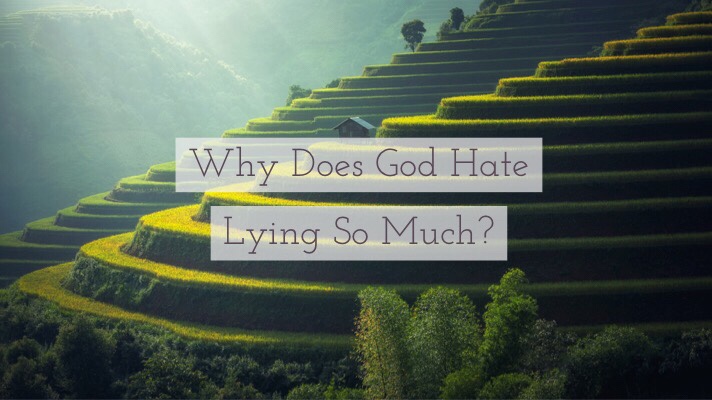 As humans, we classify sin into different categories. Some may murder as the worst sin on their list. Others may have any type of sexual abuse on the top of their list. Some may have stealing, whatever the case is, we all classify sin differently. It the justice system, there is different penalties for different types of wrongdoing. Everyone, everywhere classifies sin in someway.

“These six things doth the Lord hate: yea, seven are an abomination unto him: A proud look, a lying tongue, and hands that shed innocent blood, An heart that deviseth wicked imaginations, feet that be swift in running to mischief, A false witness that speaketh lies, and he that soweth discord among the brethren.” Proverbs 6:16-19

When I read these verses, to me it feels like God hates these seven things a little more than all the rest. In these seven things, 2 of them specifically talk about lying and you can even argue that another one is indirectly related to lying.

God is telling us that there is no such thing as a white lie or a little lie or anything like that, a lie is a lie, no matter how big or how small it may seem. Can you imagine all the problems we could avoid if we hated lying as much as God hated it.

Why does God hate lying so much? Because it caused Him to punish His creation, man and woman, and kick them out of the Garden of Eden. Can you imagine the pain God felt when He punished Adam and Eve? His creation, humans whom He created in His image, he had to punish and it all started with a lie.

Satan came to Eve in DECEIT. He came with a lie, He twisted the Word of God into his own word. He lied, deceived and tricked Eve into eating the fruit from the tree. Eve responded to Satan’s DECEIT with DISOBEDIENCE. Eve disobeyed the Word of God because she believed a lie from Satan. Because Eve DISOBEYED, God had to punish mankind and He did that through DEATH. “In the sweat of thy face shalt thou eat bread, till thou return unto the ground; for out of it wast thou taken: for dust thou art, and unto dust shalt thou return.” Genesis 3:19 We see God here telling Adam and Eve that they will return to dust. They will eventually die.

Sin is always a progression. It may start with a little lie, that will turn into something else and by the end, lives are destroyed. There is no such thing as a little lie, they are all big lies in God’s sight and He hates them. Let us watch our mouths and guard our tongues and only speak what is truth and what is right.

Thanks for your continued reading! If you would like to support us but love shopping on Amazon more, just click on this link to shop! When you do, we get a little kickback, it is just something that helps keep this blog going!!

If Amazon isn’t your thing, then head over to our t-shirt shop to get your very own Counted Faithful t-shirt!

Listen to the Counted Faithful Podcast!! You can also support us by supporting the podcast!!

Make a flat donation through PayPal!

We appreciate your support!

One thought on “Why Does God Hate Lying So Much?”